People with blue or light eyes tend to be more sensitive to light. This is because blue eyes, especially light blue eyes, have less pigment in the iris, making them more translucent. This can cause blue-eyed people to be more susceptible to glare and sunlight, leading to light sensitivity. Blue eyes may also water more in bright light as they are more sensitive.

While lighter-colored eyes may be more sensitive to sunlight, they are not necessarily more sensitive to vision. In fact, blue eyes have better visual acuity than brown eyes. This means that blue-eyed people can see small details more clearly. 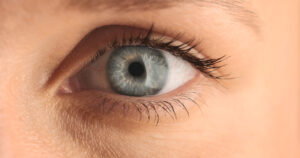 If you have light eyes, you may even find that you are a “sun sneezer”! “Sun sneezing” is a condition that triggers a sneeze when people are exposed to bright lights. It actually affects an estimated 18-35 percent of the population!

Age-related macular degeneration is more common in Caucasians than African Americans, as eyes with less pigment allow more light in the eye. But, studies show people with dark brown eyes are subject to a greater risk of developing cataracts. Protecting your eyes from damage from direct sunlight can lower this risk, though.

If nothing else, your eye color could give you an excuse to buy a new pair of shades for those bright, sunny days. It may seem like a small thing, but lighter-colored eyes are more sensitive to light than other eye colors, and taking steps to protect your eyes from overexposure could help prevent vision problems down the road. So go ahead and get those shades you want! We suggest UV lenses for any pair of sunglasses that you choose. To learn more about the best sunglasses to choose, click here!

Eye color is not immune from myths and mystery. One legend states a person with light blue eyes sees heaven and brown eyes see earth — so someone with one brown and one blue eye can see both. It’s also been speculated that those with blue eyes have rich imaginations while people with hazel eyes are passionate, green eyes indicate sharp minds and brown eyes indicate people who are calm with an underlying passion.

Science, of course, shows little interest in myths but has found that eye color can tell you a thing or two about a person.

Eye color is created by melanin, which also dictates skin color. The more melanin in your iris, which is the colored area surrounding the pupil, the darker your eye color will be. Lighter-skinned babies are born with no melanin and thus have blue eyes, until about three years of age when their eyes darken to their permanent color, and typically babies born with darker skin are also born with dark brown eyes. More melanin also means better protection from the sun– the pigment in your eyes literally protects your retina.

Light eyes such as blue, green, or grey are more sensitive to sunlight. Most people with these colored eyes are sensitive to the sudden light, such as walking out of a dark hallway on a sunny day. But, if you find yourself needing to wear sunglasses even indoors, it might be a sign of a more serious condition. If you are struggling with extreme light sensitivity, make an appointment to see your eye doctor.

Where did blue eyes originate?

While many people assume that blue eyes are a relatively rare trait, studies show that they are actually quite common. In fact, it is estimated that approximately 65% of the world’s population has blue eyes. This higher prevalence can likely be attributed to the fact that people with blue eyes share a common ancestor, who lived near the Black Sea region some 10,000 years ago. Genetic variants for blue eyes have also been passed on through migration and intermarriage, helping to make this eye color one of the most popular in the world today. So if you have blue eyes yourself, you can take comfort in knowing that you’re not alone!